Why do so many devastating influenzas such as Beijing flu and avian flu, originate from China? Could the answers lie with the mineral levels in the soil?

Viral mutation rates increase in selenium deficient conditions. Soils worldwide, and in China particularly, became impoverished in the 20th century since artificial fertilizer use and intensive agriculture. Plants cannot make minerals, being able only to obtain minerals from the soil. Artificial fertilizers contain only three or four minerals: fertile soils contain upwards of 60, as does the blood of mammalian species. Mineral starved soil produces mineral-deficient crops, animal and human populations with poor immune function. Specific types of volcanic rock contain 80plus minerals and trace elements and are widely available. When broadcast on soils it functions as a 'carbon-sink'. 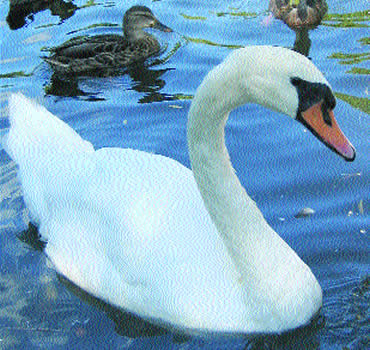 The minerals in our soil have their origins in fire and ice. From their production in the nuclear furnace of the sun, to their journey on the split chunk of molten matter from the sun that became our planet home: via earth's cooling and billions of years, volcanoes, fires and brimstone, the formation of water, then ice, to the bodies of micro-organisms, viruses, bacteria and living organisms, and eventually to us where they act as prerequisites for literally thousands of quintessential health-maintaining biochemical reactions.

There have been 17 ice ages in the last 1.7 million years.[1] As ice floes moved mountains and rocks to and fro over land surfaces, the grinding of the rock which contained the minerals and trace elements were left in their wake, leaving fertile soil. Between the ice ages (interglacial) this soil grew plants and trees on which animals and then people lived.[2]

With the average ice age lasting 90,000 years and the average length of interglacial roughly 10,000 years, the fertility of the soil grew less through weathering, leaching, grazing and cropping. Our current interglacial (now 10,800 years old) is the first in which agriculture has been practiced.2

Subsequently through use, and over use, with insufficient replacement materials put back into the soil, we are left with soils the world over with greatly reduced mineral content.9 The development of artificial fertilizers around 1850s and the downgrading of the importance of the environment after Charles Darwin's theory of natural selection was over-interpreted, omitting Darwin's emphasis on the crucial role of what he termed 'the conditions of existence'[3] has left our soils sadly impoverished.[4]

Viruses and bacteria mutate more readily in selenium (Se) deficient environments, be such environments living bodies or the soil.[4-6] Soils in different parts of the world, and in different localities within specific areas, have higher or lower amounts of certain minerals.

Specific disease patterns present themselves in defined areas, such as Keshan's disease in China. Keshan's is a form of heart disease suffered by people living in a broad swathe across China, running from the south-west up to the north-east in an area of known selenium deficiency. Keshan's is linked with Se deficiency.[7]

As more and more food is being imported from China, some of these foods, such as garlic, (an important provider of Se), could be selenium deficient. Closer to home is our bread which used to be milled from hard Canadian wheat rich in selenium. It now comes from the EU where many soils are selenium deficient.[8] UK soils used to be fertilized every few years with basic slag, providing lime (calcium). Basic slag, a by-product of steel manufacture also contains Se. Due to the closure of the British steel mills, this no longer occurs, so many of our soils are deficient too.

One swallow of course doesn't make a summer: there are however numerous other diseases implicated with Se deficiency, including HIV/AIDS:[10-12] indeed medical literature overflows with many more problems than the few mentioned here.[12]

Finland had a big problem with heart disease,[14] one causal element being Se deficiency, both in the soil and in the population, (along with indecent quantities of saturated fat, insufficient fruit and vegetables and other factors). As plants can't make minerals, and can only avail themselves of whatever the soil contains, the net result of soils lacking minerals is therefore mineral deficient forage, milk, meat and crops (wheat for example, so bread, pasta, etc., would be short of Se), fruit and vegetables and so on.[15]

This ultimately leaves a population deficient and wide open, not just to heart disease but a number of other preferably avoided highly unpleasant diseases or effects like influenza and losing our oaks and our conkers,[20] (see below). Selenium is an essential ingredient of a properly functioning immune system in plants and animals.[15]

Finland solved the problem by legislating that Se be added to fertilizer. Via the soil, forage and food plants, milk meat and vegetables the Se levels of the population were, a few years later, approaching normal.[16] (Ironically, our government cited MMR results from Finland, whose population now have adequate levels of Se, to prove they were right in encouraging MMR uptake – compared to a UK population which often has low Se levels – not entirely sound science).[17]

Of course Se is by no means the only mineral: much could be said of a dozen other important minerals, were they

also to be put back in the soil. Over 60 minerals and trace elements are found in the blood, most of which have specific functions, often as catalysts for specific enzyme reactions – of which there are some 4,000 going on the body over a 24 hour period.[18-19] So it's not just one, but a sky full of swallows.

Returning to viruses and bacteria mutating faster and more readily in Se deficient cells, blood, living bodies, the soil, plants and trees. Right now we have creepy diseases attacking our trees. The oak is now being affected by 'sudden oak death: more recently conker (Horse-chestnut) trees have been succumbing to a fatal virus. What if there were no conkers.[20]

So, in a worst-case scenario, mineral deficiency could slowly cause the death of other parts of our known and loved environment. Bearing in mind many soils internationally are Se (and other minerals[21]) deficient it would seem a simple, not hugely expensive, operation to apply mineral dressing to all our soils where it is found deficient, both cultivatable land, grass or forest, lake or pond.

Better still, we should use the end product currently gathering in 10,000 ton heaps around open-cast volcanic rock mines, waste product of the road building industry. Ground rock dust which naturally contains upwards of 60 minerals, including Se, and a highly desirable alkalinity (pH 10 +). (It also contains fluorine and would seem a better alternative than adding fluorides to our water supplies.)

It is being used in Scotland, particularly around Pitlochry and Dundee, which Tayside Contracts provide as a hitherto unusable by-product (tiny particles and dust) left over at the end of producing tar macadam for the roads and motorways.

Moira and Cameron Thomson of the SEER Centre research unit are pioneers (UK) using this rock dust. They are working in association with Glasgow University with Professor Hugh Flowers,[24] and achieving inspirational results on their six acres of gardens 1,000 feet above sea level amidst the Highlands, on notoriously acid soil (pH 4.5). The produce from their land is of Findhornian proportions with high mineral content.

Rock dust can be spread around trees, and fed to animals. Poultry will take it as grit, leading to eggs with harder shells as well as higher mineral content. The use of azomite in the US has demonstrated boosting immune response in poultry, and bringing sick trees back to health.[28]

SEER is also working with several well-known and highly respected Scottish Corporations. This ground rock dust even draws carbon dioxide from the atmosphere to feed the micro organisms in the soil, which after their cycle of activity and death then sink down in the subsoils. This 'carbon sink' mechanism could be employed worldwide to counteract global warming.[2,22-24]

If undertaken via the legislature on an European level, within a few years the mineral levels of humans, animals, birds, trees and plants and all creatures that live on them would be well on the way to restoration. The results would be greater resistance to disease (more efficient immune systems), healthier and more nutritional plants, and less influenza. As importantly, it could play a vital role in reducing atmospheric carbon dioxide levels.

Medical, nutritional, veterinary, agricultural and soil scientists should have a conference discussing this important subject, before applying to the EU for funding.